Ninja Turtles.  The last time I saw this level of nation-wide mobilization was Operation Desert Storm.  I was an Air Force Communications Officer working with the Military Airlift Command.  The ground, sea, and airlift logistics was a monumental endeavor.  Shortly after I arrived in Saudi Arabia, I saw "Ninja Turtle", aircraft nose art on one of the C-130 Hercules airlifters parked on the reamp.  I saw other local artwork on the doors to our quarters in our hastily constructed tent city... "Roger Rabbit", "Jessica", "Bugs Bunny", just to name a few.   It was a throwback to the earlier wars of the 20th century (Vietnam, Korea, etc.), especially WWII.  It instantly connected me to my father's generation, "the Greatest Generation".  He was Army Signal officer posted in the Solomon Islands during WWII.  He passed away in 1984.   What I was experiencing during Desert Storm (1991), was similar to what he experienced as a young Lieutenant in WWII (1943-45).

Aircraft Nose Art: A Popular American Phenomenon. I have always enjoyed the uniquely American phenomena of aircraft nose art, as it captures the spirit, independence, and some would say, the rebelliousness of the aircrews who were prosecuting the war.  It also captured the idea that the aircraft , "the ship", was also a member of the aircrew... it had a name.  Nose art became a rallying icon for the crew...almost a kind of folk-art mythology.

Don't get me wrong, I think much of the fine art through ages is great. However, I would rather go to an aviation museum and look at aircraft nose art on any day of the week, rather than go to the Louvre.

The Artist. My past military experience inspired me to work with a very talented local artist, McKenzee Kuhlman,  to come up with the concept of  "Caduceus The Virus Slayer" the "Medical Knight", an icon of the current battle we are now enduring with the COVID-19 virus.  McKenzee Kuhlman and her husband Dustin have their own pet care business.  McKenzee works on various art projects as time permits .  I have collaborated with McKenzee on past projects and we have one of her drawings of our two rescue dogs (Sydney & Arial)  now displayed in our living room. 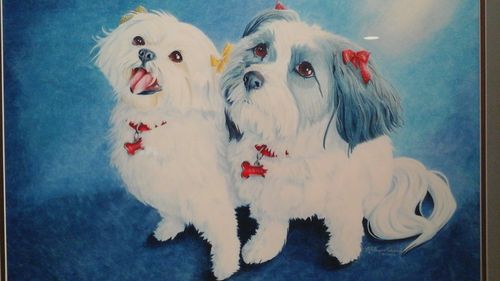 Why a Knight?  The Knights of old were very special warriors.  They were highly trained with a specific set of skills. Training & education started in their early teens and usually took 4 to 6 years to complete.  They were dubbed into knighthood when they were in their early 20s. Recurring training was often required to keep their skills sharp and ready.  They were required to take oaths to live by a code of honor that governed their behavior and how they interacted with others.  Often times their oath would include elements such as: Defending others who could not defend themselves;   putting the needs of others before themselves; kindness and respect to others; and above all: bravery.  A knight wears protective gear so they can receive many strikes and blows yet still be able to continue the fight.  A knight is skilled in the use of many tools and weapons in battle; a skilled knight has the knowledge and training of which ones to use, and when.

The Toll.  My appreciation for aircraft nose art was further enhanced by a visit to the American Air Museum in Duxford UK in 2002; where many vintage aircraft were on display from WWI and WWII era.   Leading up to the hanger was a stark reminder of the toll these world-wide events usually incur. Beside the walkway were 52 glass panels, displaying silhouettes of the 7,031 aircraft lost/shotdown during the air war over Europe.  Most of  silhouettes were of large multi-engine aircraft (i.e. bombers), each having an average crew compliment of 10 men.  These crews named their "ship", painted their nose art, and went into harms way to complete the mission.  The cartoon character or icon on the side of the fuselage, was kind of the crew's way of "raising the middle finger" at the danger and enemies they were about to experience. Caduceus the Virus Slayer is our way of "flipping the bird" at the virus and throwing a few expletives.

More Aircraft Nose Art:  During World War II, and again in the Korean, Vietnam, and Gulf Wars, colorful images appeared on the nose sections of American military aircraft. Loved and hated, photographed and censored, the paintings known as nose art have been a controversial tradition.

Not to be confused with official markings or insignia, nose art personalizes a plane for its crew, because it is the crew members who name the plane and create the art, imbuing the plane with an identity of its own. Although some examples of nonregulation art can be found on the military aircraft of other English-speaking countries, the phenomenon is predominantly American, perhaps due to the streak of rebellious individualism attributed to American culture. Nose art is important as an historical and societal indicator over time, an example of folk art or popular expression, and a record of the past. 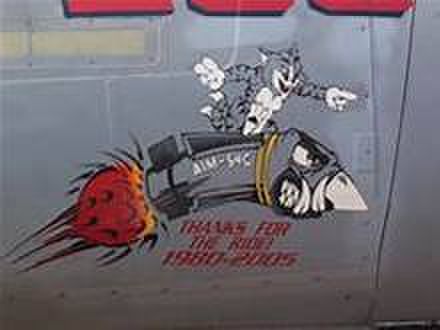 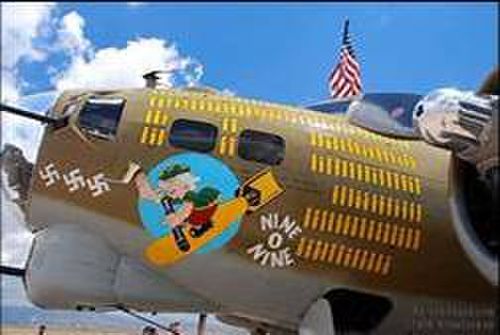 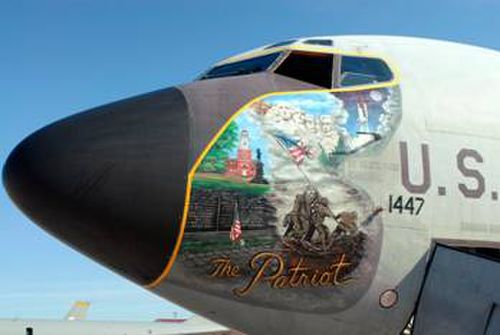 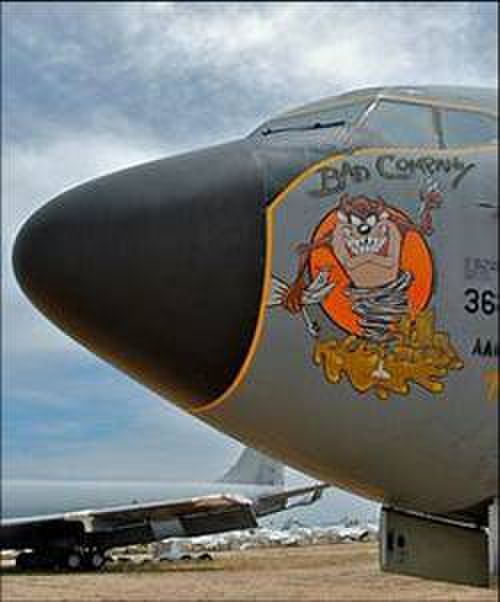